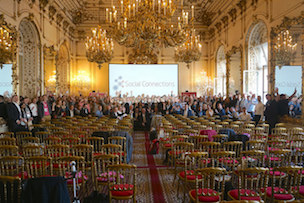 Mixed emotions at the end of a conference as always. The team is physically and mentally exhausted, so we are happy to see an end to it as we can now go back to full nights sleep and actually taking time to have lunch during lunch.

On the other hand, this conference that is so close to our hearts we have been working together on for months is over, how can it already be… It was too fun to be over already…

So what has happened in those 2 days… a lot, we kicked of with some great keynotes by IBM, Customers and External speakers to the fill up all 4 rooms across all tracks for an afternoon packed with sessions. Only to be paused for some food in the amazing palace we held the event at.

The evening dinner was a blast, what an amazing experience… It was hosted in the oldest basement in Vienna and had no cellular reception and no WiFi… We must admit we were not 100% sure it was a good idea to send 200 IT geeks into a basement where they could not use their phone, but it seems all survived and only about 60% needed mental treatment afterwards.. Unintentionally the lack of WiFi in the cellar was completely inline with the lack of it at the venue on the first day. We tried solving it on the second day to have 1 of the team members rush out to pick up some 4G routers and it seemed to help a bit. The evening in the cellar was a blast, the photo booth got us some great pictures and everyone seemed to have a good time.

On the second day we toned it down and only used 3 rooms… Lot’s of great sessions again to end in the main auditorium again for the Connections Pink session and closing with prize draw… Again a couple of winners that were not in the room, we should really start listing them on the website so they realise what they have missed out on by not staying around…

The team’s view on the conference… apart for the normal organisers hickups….it was a GREAT event… it shouts out to us.. let’s rock on with