Social Connections 10 was our biggest North American event, and our third largest ever! 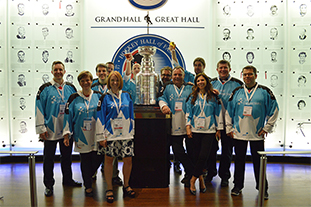 I am high in the sky over Atlantic heading back to Europe so I have had several hours to think about a recap of our last event in Toronto. Wow, it was a blast again!

After many weeks of hectic preparations, the two conference days ran as racing horses. Now there is a time to recover, take some breath and shout “Oh my, we did it again!”

First of all, we had a fabulous event with more then 200 attendees, 18 sponsors, 64 sessions, and 70 speakers.

Thank you all so much for coming!

We had all the ingredients that make a good event – a great venue (perhaps the best ever) with a VIEW of the nice city of Toronto, awesome speakers, exciting agenda, some great announcements and especially you – the attendees. All together, it created an atmosphere – as some say – “that no other user group has”.

At the moment, we are collecting presentations from our speakers and will publish them on SlideShare over the next week or so. All “official” photos have been already uploaded to Flickr and we hope that some people find a new profile image there 🙂 If you have your own photos or videos that you want to share, then just let us know.

We announced that the next event will take place in Southern Europe late this year, with more details coming in August.

I hope that everybody enjoyed the event as much as the Social Connections team did! Thank you all again for coming, and special thanks to IBM Canada and to our sponsors, as without them we could not run these events.

Enjoy the summer and see you all at Social Connections 11!